Another memorable trip was when we finally managed to rent a boat to take to
Cayo Costa State Park , it was a lot of fun and the highlight of the trip. We did manage to get a little stuck on a sandbar, and then the youngest did an unexpected roll off the boat.
At the same time she decided to lean over the side grandpa started backing up the
boat and plunk she was gone! 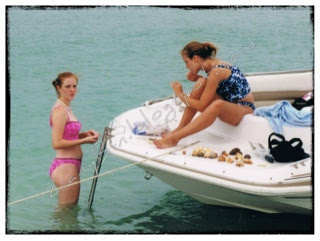 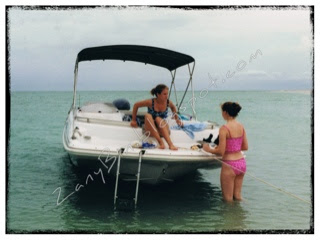 Not too many years after that trip, we were joined by a son-in-law and
a son-in-law to be. This was also to be our last Sanibel trip with Grandpa Bob as
he passed away later that year. 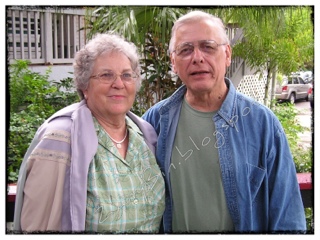 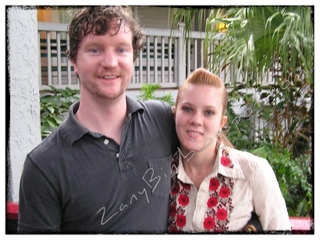 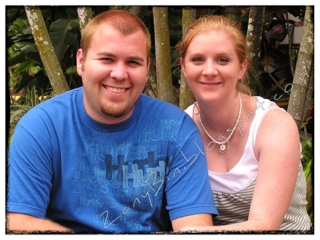 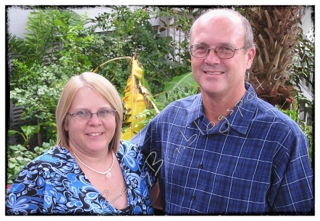 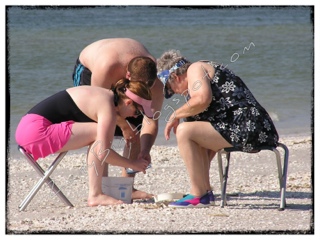 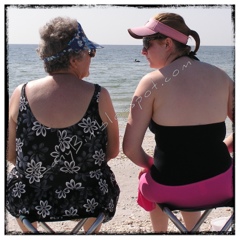 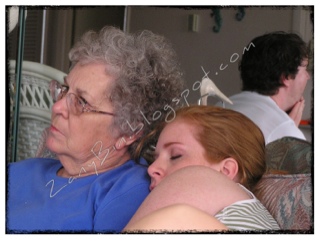 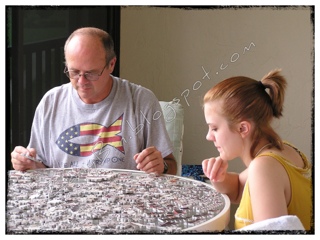 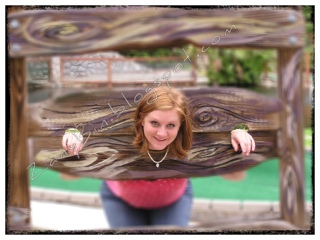 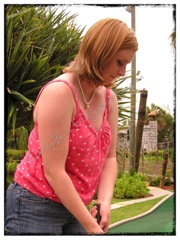 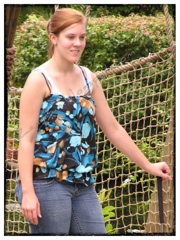 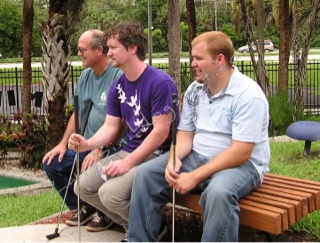 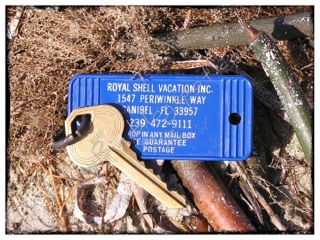 Our, or at least, my favorite vacation when the girls were young was to go to Sanibel Island in the summer to look for seashells by the seashore...... 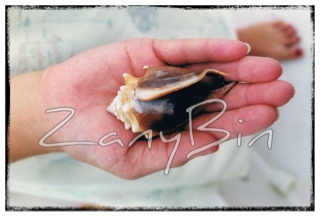 Our first trip we had more fun finding sandollars by scraping the bottom of the gulf with a foot until we felt something then holding our breath and reaching in to bring one up. This was before a limit was made on how many live ones you could take. We also bought a "shell scooper" to scrape along the sandy bottom to bring up seashells with live animals in them. Talk about a stink when you took them back with you, needless to say there was a lot of bleach involved in getting them craft ready, which was our goal. Though that never stopped us from visiting She Sells Seashells but our favorite place to go for crafting supplies was Sanibel Seashell Industries . You can find display boxes, fiber board shapes, mirrors, lamps with clear bodies to fill with seashells, empty snow globes to fill, just all kinds of things including shells from other parts of the world. 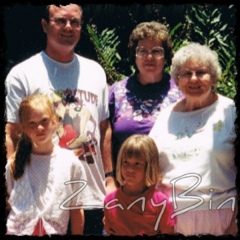 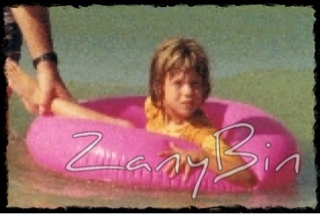 On one Sanibel vacation the women decided to go shopping off the island at an outlet while "the man" took the Chevy van and had the tires rotated and balanced due to vibrations while driving down. It wasn't until we were on our return trip home that we discovered that the tire people had made a grave error. 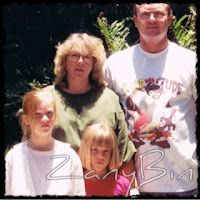 An hour from home while travelling in the left lane of I-95 north with bumper to bumper traffic and a tour bus on my tail that I felt an issue with one of the tires. Somehow and I firmly believe by God's hand did I make it to the right hand lane then onto the shoulder. When my husband examined the tire he discovered that the lug nuts were not only missing but that 4 out of 5 of the studs had sheared off. We only had one lug holding the tire on! He then proceeded to check out all the lugs on the other wheels to discover that not a one had been tightened down! 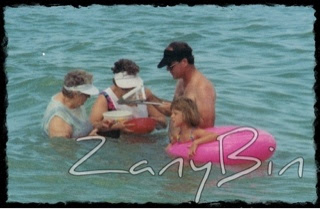 You have to understand we only had one bench seat in the rear of the van, no kid seats, it was not a fancy conversion van but a work van. If we had rolled, children and adults would have been flung every where. God showed his mercy and protection that day. 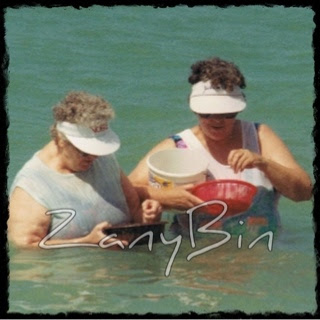 It took about an hour to go one mile to the nearest exit with him jumping out every few yards to tighten that one lug until we safely reached a gas station where we could make a phone call to my brother to bring the necessary items to repair the wheel.

Posted by Zbinthere at 8:14 PM No comments:
Email ThisBlogThis!Share to TwitterShare to FacebookShare to Pinterest
Labels: Sanibel, Vacation

I work in a pharmacy and I've been in an outpatient pharmacy for the last four years.
I never realized how much people misunderstand the terms brand name and generic.

Even before I became a technician six years ago, I always compared over
the counter (otc) medications to see what was actually in them. Benadryl (an antihistamine)
is diphenhydramine which is also found in Tylenol PM and other otc sleep aids.
Get it?

So when we tell someone we don't have that medication, that means we don't have the
brand or the generic for that brand.(We work with a formulary for outside scripts.)
Get it?

Also when it comes to birth control...when the script says "substitutions allowed" that does not mean we can pick any birth control. It has to be a perfect match chemically. There are so many combinations of female hormones in them and then the
percentages of each hormone can differ widely.
Get it?

There's one other pet peeve about working in a pharmacy, how can a patient with TEN prescriptions expect their's to be typed, scanned, filled, and checked in the same amount of time of ONE prescription for another patient?? and then there's the patient with ONE prescription who wants to know why his is taking so long, well someone in
front of you brought in THIRTEEN!!!
Get it?

Even though there are many problem patients,
we have many pleasant happy patients who greatly
appreciate our service and for those we are so
happy to go that extra mile !

Posted by Zbinthere at 3:05 PM No comments:
Email ThisBlogThis!Share to TwitterShare to FacebookShare to Pinterest
Labels: Work 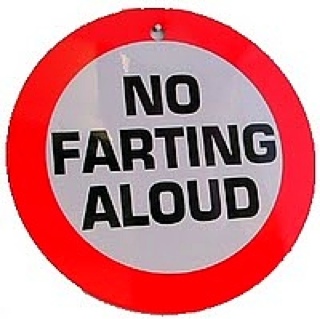 Especially those SBD's (silent but deadly's) something I've mastered well. I try to make it to the back of the pharmacy but by the time I get there it's already a done deal. The other day something smelled really bad, very "the man" worthy, I thought it was the patient but when I moved away it went with me, I had no idea there was such a thing as Ninja SBD's ! 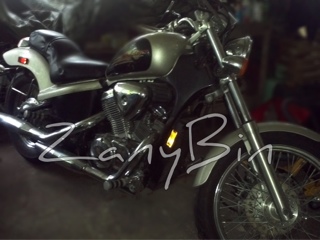 .....you can't learn new things after a certain age.
This year I decided it was time to learn to ride a motorcycle. I've earned the endorsement on my license and since the man works on motorcycles I have my own bike. I'm still just riding around the neighborhood but that didn't keep me from running into a four foot deep ditch with two feet of water. Ditch water is nasty and very itchy, I couldn't get into the shower fast enough. I highly recommend staying out of ditchwater.

......you can text and drive.
I can't, even voice to text has risks. What I do enjoy is checking email, weather, coupons, whatever at red lights. Sometimes I miss the light turning green but another driver will kindly remind me with a honk of their horn.

Posted by Zbinthere at 3:04 PM No comments:
Email ThisBlogThis!Share to TwitterShare to FacebookShare to Pinterest
Labels: Motorcycle, Text, Work

We took a road trip this past long weekend.
It was fun! 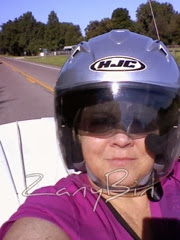 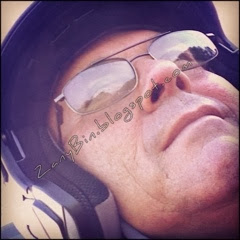 I took pictures with my phone, see the trailer, see the man, I was lucky to get that shot of him.

We left our home Saturday morning about 8:45 am, then went
back to the house twice.
The first time we forgot the charging cable for our intercom system,
the second time because the chains on the trailer
would come off with each bounce on the road.

Of course the man knew just how to fix it.

Uh, did I mention I sprained my right ankle and very badly bruised my index
toe on the left foot on Thursday night ?
I stayed home from work Friday so I could keep my ankle elevated.

It worked, I wore my lace up ankle boots to compress
the ankle and traveled quite well. 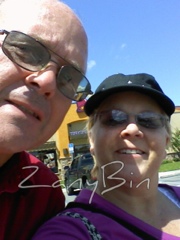 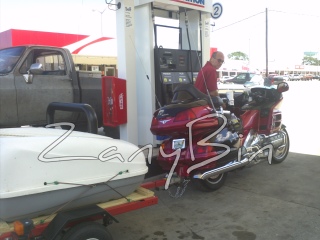 I got that of the two of us in one shot! 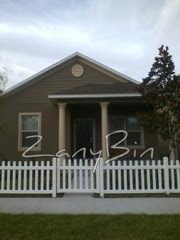 We arrived at my cousins new place about 3pm, we mostly took back roads, a little I-75 on the last bit, we were getting tired and HOT. We're not as young as we used to be.

ok ...ps I did something stupid and deleted some of my photos...I've tried putting them back in........
Posted by Zbinthere at 5:27 PM No comments:
Email ThisBlogThis!Share to TwitterShare to FacebookShare to Pinterest
Labels: Labor Day, Motorcycle, Vacation
Newer Posts Older Posts Home
Subscribe to: Posts (Atom)